You are here: Home / INDRP / Transfer /Cancellation of Domains under INDRP, last 11 years

Domain Disputes are filed under INDRP for the remedy of Transfer or Cancellation of Domain Name, with or without compensation. The official fees for an INDRP matter is Rs 30,000+ GST (i.e. approx $500). 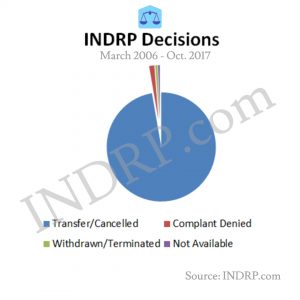 Therefore, every Complainant tries to make a prima-facie case in his favor and the statistics almost depicts the same story. Till October 2017, over 900 cases have been decided under INDRP procedure, out of which Complainants have got relief in their favor in 97% of the matters which is either as a Transfer or Cancellation of Domain Name, while it has gone in favor of Respondent 1.5% of the time only.

Though most of the time, Complainants try to claim for compensation or at least Legal Costs but only in 16% of these 97% matters, compensation has been granted in over 11 years of INDRP history.

On some occasions, some decisions like in the matter of Gaadi.in, Zodiac.in, WWF.co.in, etc where mostly generic names were involved were reviewed in favor and against as well. But in most of the cases, given the facts / circumstances, use of the domain, the quality of response filed, etc did go in favor of the Complainant.