The Complainant “FDC Limted” has been in pharmaceutical business in India since 1936, with different organization structure and different names but changed its name to “FDC Limited” in 1988 as it became a deemed public limited company. The Complainant is into range of pharmaceutical products, manufacturing generic medicine and also undertaking research in various locations in India, with a turnover over thousand crore in 2015-16. It also has subsidiaries in United Kingdom.

The Respondent is a company founded in 2005 as a sole proprietor and incorporated in 2012 in Germany. The main purpose of company is to develop and sell various soil and fertilizer products to the public in the European Union only. It markets itself as a front-runner in innovative soil substrates and products. The Respondent owns various domain names to cover its past, present and future products.

Complainant argues that it has secured registration of mark “FDC” and variations in India and the trade mark is a well known mark and its protect-able as such under the provisions of the Trade Marks Act, 1999. The Domain Name completely incorporates the Complainant’s registered Trade Mark “FDC” and as such the use of the Domain Name is bound to cause confusion and deception in the minds of the public that the Respondent has some connection, association or affiliation with the Complainant. 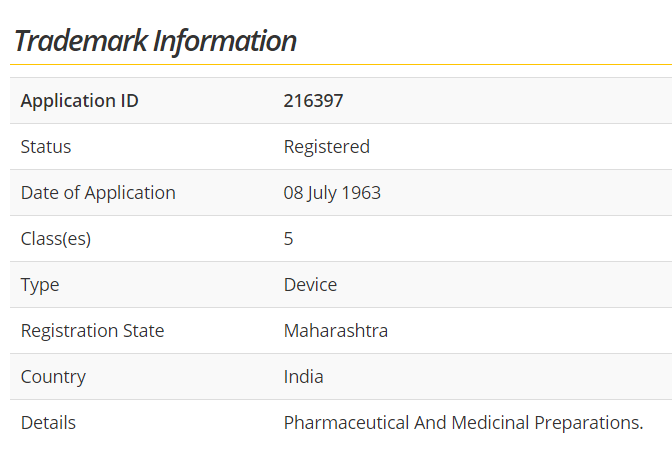 Complainant further argues that the Respondent does not have any legitimate interests in the Domain Name as the Domain Name has been placed on sale. Further, Respondent is not making a legitimate non-commercial or fair use of the domain name, without intent for commercial gain, to misleadingly divert consumers or to tarnish the trademark or service mark at issue.

Lastly, Complainant argues that Respondent’s decision to incorporate the domain name FDC.in after Complainant had registered FDC as a trade mark as well as company name, and decision to list the captioned domain name for sale, constitute bad faith within the meaning of para 6(i) o the INDRP Policy.

Further, Respondent is intentionally preventing Complainant from registering the Domain Name and intentionally attempt to attract, for commercial gain, internet users to its website by creating a likelihood of confusion with the Complainant’s trade mark “FDC” in accordance with INDRP Policy.

Respondent until 2015 used to offer a product called Flour and Calcium which it implies it marketed under the initials “FDC” but ended the offering due to lack of demand. Since 2016, it has been offering the domain FDC.in for sale. It states that it had clarified that “FDC” is a generic term which could be used for many purposes, and has identified a number of other purposes which the initials replicate. It notes that the sales website holds open the option to the Complainant to make an offer to purchase the concerned domain name, and that listed price is 3000 euros, with a minimum offer available of 1000 euros, which is “not an outrageous offer” for a generic 3 letter domain name.

Lastly, Respondent criticizes Complainant for failing to register other relevant domain name as well a top level domain name as evidence that Terra Preta is not preventing FDC from being present on the Internet in a variety of alternative forms. Further, the Complainant is indulging in Reverse Domain Name Hijacking by making a cybers-quatting claim against a domain name’s rightful owner. It argues that owning generic domain names is not an argument to justify allegations of bad faith.

I. Identical and Similarity to the Trade Mark

The Domain Name is identical to the Trade Mark of the Complainant, the same has been admitted by Respondent as well.

In the respect, Respondent claims that it has equally legitimate right to use the Domain Name. Respondent claimed it registered the Domain Name on 16 February 2005 and continued to offer a product until 2015, well before any notice and thus demonstrating good faith. Arbitrator relied upon World Wrestling Federation Entertainment Inc. V. Ringside Collectibles,wherein it was held:

Respondents seeking to show preparations to make a legitimate use must give Panels some evidence; acceptable evidence may include business plans or documented expenses, but will of course vary with the nature of the use and the particulars of the domain name.

Respondent, however, offers nothing beyond his own contentions. In these circumstances, the failure to present any credible evidence of demonstrable preparations to offer auction services is fatal to Respondent’s claim of a legitimate interest in the domain names.

The Tribunal can only infer from this that the Respondent has “engaged in a pattern of such conduct” since the domain name in question relate to will established and well-known brands, whether in India or globally. For the purpose of this dispute, this is further evidence under INDRP Policy for registration and use of a domain name in bad faith.

In light of the circumstances and facts discussed above, the Tribunal decides “the dispute domain name is identical and confusingly similar to the registered trademarks and also the trade name of the Complainant in which Complainant has rights and he Respondent has no rights or legitimate interests in respect of the Domain Name and the Respondent’s Domain Name has been registered and is being used in and Faith.

The Tribunal orders the Disputed Domain Name FDC.in be transferred from Respondent to the Complainant. Further, the Respondent is ordered to pay cost of the proceedings at INR Rupees Fifty Thousand Only.

The Response as provided in the matter of Georg Mez AG v. Mez Kalra [Case No. D2016-1932] are more favorable to work in such matters related to acronyms, to take an extract:

The fact that “MEZ” is a three-letter combination and used by many third parties, including as a common acronym for entities unrelated to the Complainant, is evidence that the Complainant has no exclusive rights in the term and this supports the Respondent’s legitimate interest in the disputed domain name.  The Panelist held that the Respondent has established that, as one might expect, the term “MEZ” is in widespread use, particularly as an acronym and that the disputed domain name is part of a pattern of similar three-letter domain names owned by it.

Similarly in the very recent matter of M/s Butterfly Gandhimati Appliances Limited Vs. Amit Sindhwani (INDRP/919) it was held that:

But the Doctrine of Laches no more applicable, therefore seems to have been ignored in the decision in view of WIPO Overview 2.0:

The consensus view of UDRP panels at paragraph 4.10 of the WIPO Overview 2.0 states: