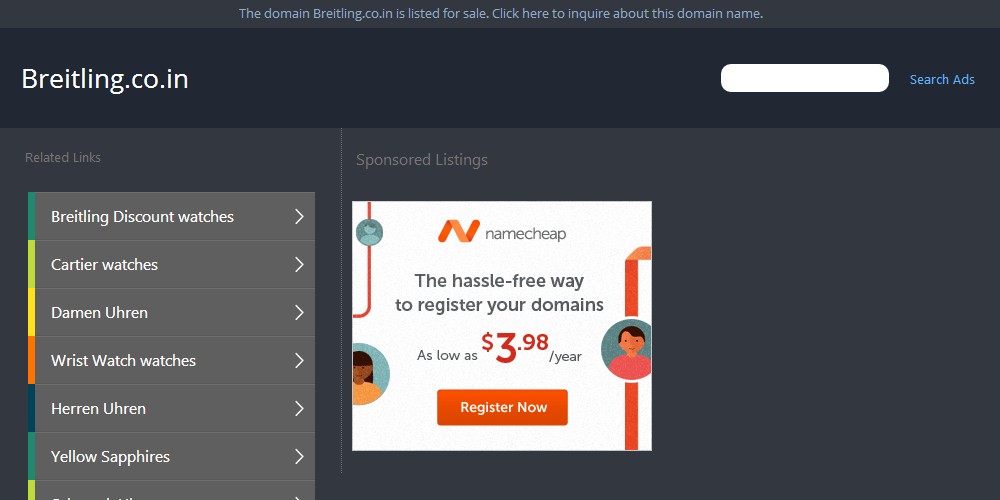 Breitling SA is a watch manufacturing company. It designs, engineers, manufactures and distributes chronometer watches. Breitling is a privately owned company founded in 1884 in Grenchen, Canton of Solothurn, Switzerland. The last domain dispute filed by the company was for breitling.info way back in 2004, that was terminated.

While no doubt they are based upon registered Trademark in Germany and various other jurisdictions. Further, both domains have parked pages at Name.com and Bodis.com respectively, displaying competitive advertisements and one of them (.co.in) has been put up for sale. This all goes against legitimate use and proves Bad Faith!

Therefore, the following basic conditions of .IN Domain Dispute Policy seem to be satisfied and in no case transfers can be denied:

Also, in the matter of breitling.co.in, the Respondent (namely GaoGou – YERECT INTERNATIONAL LIMITED of Toronto, Canada) has already have numerous INDRPs against him including penalty of Rs 10 lakhs in the last matter of zanussi.in (INDRP/630) but maybe operating under false WHOIS, the Domain Registrant is unmoved. The following INDRPs have already been decided against him in the last one year or so…

Mahindra Group has filed for a Domain Dispute against domain name Mahindra.in with Nixi/.In Registry … END_OF_DOCUMENT_TOKEN_TO_BE_REPLACED

In the matter of JaguarLandRover.co.in, the Domain has been ordered to be transferred to the … END_OF_DOCUMENT_TOKEN_TO_BE_REPLACED